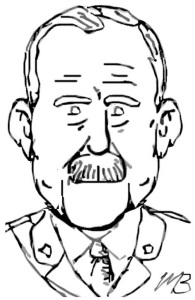 GIVE US HIS NAME
Nearly everyone knows of ONE MAN who should be in khaki to-day. We ask you to give us his name so we can call upon him and give him this opportunity to join an Overseas Battalion—

Doing this does not imply any slur upon the man you name…
That man whose name you give us may be just waiting for this chance…
Take this duty seriously. Do not send us unsuitable or “spite” names…

Authorized in late 1916, the 255th Battalion was to provide reinforcements for the 3rd Battalion fighting on the frontlines France. The commanding officer, Lieutenant Colonel George Cooper Royce quickly realized the dire recruitment situation in Toronto. Having already provided multiple battalions, and with many more units still trying to enlist men, the Ontario capital had nearly exhausted its reserve of suitable soldiers.

Born in Toronto on 29 July 1865, Royce had served for twenty-five years in the Queen’s Own Rifles and was a member of Loyal Orange Lodge No. 207. In January 1916, Royce succeeded Frederick Fieldhouse Clarke as commandant of the Kapuskasing internment camp. After being appointed commander of the 255th in July 1916, he organized a mass public campaign to gather volunteers. The “Give Us His Name” drive called on civilians to submit the name and address of friends or relatives not yet in khaki. Royce explained, “We have a very difficult proposition before us and therefore want the assistance of every citizen.”

Rather than compulsion, Royce described the effort as “moral suasion.” Advertisements distributed in Toronto newspapers provided a coupon for readers to fill out another’s name and residence. Once the battalion office received the information, recruitment sergeants visited the man’s home to judge his fitness as a soldier. Royce reasoned if he could show a potential recruit “that fifteen or twenty of his friends think he ought to be in uniform he would have trouble refusing.”

According to the 255th Battalion’s own advertising, by January 1917, over 8,000 names had been received of which 1057 had been investigated. Of the 99 who actually agreed to join only half were determined to be physically fit. The failure of the “Give Us His Name” and similar volunteer recruitment strategies convinced many Canadian military leaders and politicians that conscription was the only method to secure critical reinforcements. The 255th sailed for England in June 1917 with less than three-hundred volunteers. 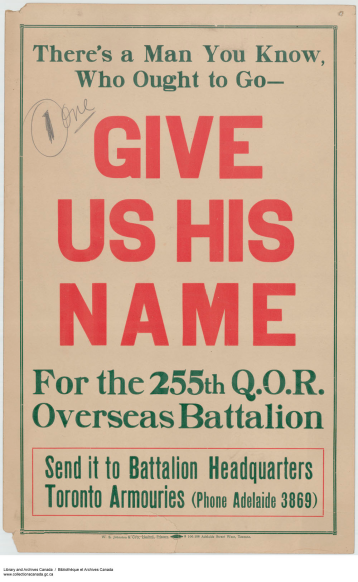 2 thoughts on “The Shame Monger”