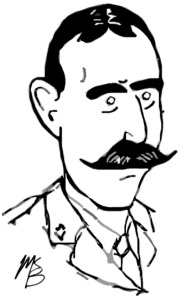 Like his brother, he is every inch a soldier.
(Brantford Expositor, Dec 1915, 5)

Ernest Charles Ashton and Alfred Nelles Ashton served in the 38th (Dufferin Rifles) Regiment for a combined forty years. Born on 28 October 1874, E. C. Ashton was the regiment’s commanding officer and a prominent doctor in Brantford. His younger brother, A. N. Ashton, born on 14 March 1879, was principal of the Mohawk Institution. Their father, Rev. Robert Ashton (1843—1930), was chaplain of the Dufferin Rifles and long-time superintendent of the Mohawk Institution.

In January 1915, Doctor Ashton was appointed commanding officer of the 36th Battalion with his brother second-in-command. The battalion departed Canada for England on 19 June 1915. E. C. Ashton was promoted to brigadier general, took commanded of the 3rd Training Brigade Shorncliffe and later the 15th Infantry Brigade. In late 1918, he was promoted to Adjutant General of the Canadian Army. From 1935 to 1938, he was Chief of the General Staff in the Canadian Army. 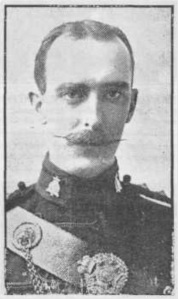 Alfred Ashton succeeded his brother in command of the 36th on 15 September 1915. Shortly after arriving in England, the younger Ashton had been admitted to Moore Barracks hospital on 1 July 1915 for gastritis and alcoholism. The medical examiner noted Ashton, “Felt perfectly well until a few days ago. Has been taking alcohol (whiskey), excessively…” The doctor found the patient, “Very excitable. His hands tremble when held straight out and cannot extend any control over the trembling. Very nervous both in speech and movements.” He was treated again one year later at West Cliff hospital for alcoholism.

Despite his stomach pains and apparent drinking problem, A. N. Ashton was cleared for service in France. He was attached to the 4th Battalion in August 1916. After just one month in the field, Ashton reported to base wounded on 9 September. The description of his peculiar injury read: “Sniper’s bullet smashed revolver which grazed skin of abd. Wall. Contusions & haematoma” On the recommendation of a medical board he was granted one month leave in Canada. When he returned to England he rejoined the 36th Reserve Battalion.

However, by March 1917, he was back in hospital diagnosed with chronic gastritis. He was treated with paraldehyde, ironically mixed in whiskey. Paraldehyde was a central nervous system depressant and hypnotic often used in mental hospitals. As an 1889 American medical journal stated, “In asylum practice it is often convenient, but not always desirable, to give it in whiskey, which also fairly disguises the taste.”

Found permanently unfit for service, Ashton returned to Canada in mid-1917. In addition to gastritis, nervousness and alcoholism, he also required tonsillectomy. In January 1918, a medical board in Toronto classified him “category C3,” unfit for frontline duty. The examining doctor dated Ashton’s “Nervous debility” to his brief tour of duty on the front in September 1916. He described Ashton’s current appearance: “General nervous condition has very much improved of late. He sleeps well. There is a slight tremor of the hands.”