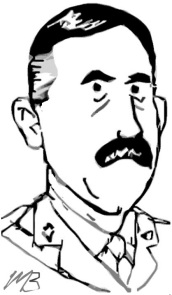 Col. Vaux Chadwick, of the 124th Battalion, appealed to recruits: he pointed out that the 124th, called the Pals Battalion, was distinct from any other, as men joining who brought friends, were allowed to keep together in companies right thru training, and would eventually be able to fight side by side. The speaker appealed to the women and girls present, who he said could do a great deal for the cause by refusing to be seen out with any young man who had not donned the khaki.

William Craven Vaux Chadwick was the former commanding officer of the he 9th Mississauga Horse and partner in an architecture firm with fellow colonel Sam Beckett of the 75th Battalion. Chadwick was born in Toronto on 6 December 1868. He had long served in the 36th Peel Regiment and retired as the 9th Horse commander in 1913. In December 1914, he organized the 4th Mounted Rifles from the Toronto cavalry regiments, the Governor-General’s Body Guard and the 9th Horse.

In June 1915, Chadwick, “who had never become reconciled to the Regiment being a dismounted unit” transferred to the 7th Infantry Brigade. In late 1915, he was authorized to raise an infantry battalion from Toronto.

Arguing that, “many men of military age have held back from enlistment owing to the fact that they were unable to fight side by side with companions,” Chadwick organized the 124th based on the British “pals” system. While other Toronto battalions struggled, he succeeded by recruiting groups of friends from social clubs and sporting associations.

The battalion sailed for England in August 1916. It was redesigned a pioneer battalion and deployed to France in March 1917 under Chadwick’s command. He remained with the 124th until 18 October 1917 when he took a position with Canadian Corps Headquarters. Major J. T. C. Thompson succeeded him in command.

After the war, Chadwick returned to his architecture career and became honorary colonel of the Mississauga Horse. He died in May 1941.