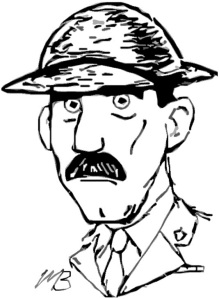 When his battalion was held up by intense machine-gun fire in front of a village, he organized a party from his reserve company and, under cover of the smoke from a derelict tank that was on fire, he personally led the party and rushed a wood, capturing sixteen machine guns, and routed the enemy, who retired on a broad front. He then pushed on his battalion and took the village with a rush. His example of personal gallantry, and his quick appreciation of the situation and rapid action, enabled this important result to be so successfully obtained.

A graduate of the University of Wisconsin, Alfred Blake Carey served in the 2nd Wisconsin Volunteers during the Spanish American War and the Remington Guards during the Boer War. He was born Blenheim, Ontario on 3 June 1881 and later worked as a civil engineer in British Columbia. In September 1915, he enlisted as a major with Lorne Ross’ 67th Pioneer Battalion. After the battle of the Somme, he transferred to the 102nd upon arriving in France in November 1916. He succeeded Major Charles Benson Worsnop as second-in-command and led the pioneer battalion at Vimy Ridge. In recognition for heroism during the offensive, Carey won the Distinguished Service Order,

In May 1917, Brigadier General Odlum appointed Carey to take command of the 54th Battalion after the court martial of Lieutenant Colonel Valentine Vyvian Harvey. By the end of the war, Carey was three-times wounded in action, five-times mentioned in dispatches and received a D.S.O. Bar.

After returning to British Columbia in 1919, Carey became customs collector in Vancouver and waged war against American smugglers and rum-runners. He died after a short illness on 29 March 1922.