I would sooner see a man go around and murder people outright than have him peddling this sort of thing [cocaine]. It is apparently the greatest danger and menace against which we must contend. Once addicted to the habit, a man is never cured and is no longer a human being but a beast.

Born in Yale, British Columbia on 25 December 1863, Gilbert Edward Sanders was a graduate of the Royal Military College and a Calgary police magistrate. A former Northwest Mounted Police inspector, he was also a veteran of the 1885 Rebellion and the Boer War, where he won the D.S.O. Notorious for his harsh sentences, corporal punishment and blatant bigotry, Sanders once remarked, “the cells were the proper abode for many of the coloured men.”

END_OF_DOCUMENT_TOKEN_TO_BE_REPLACED 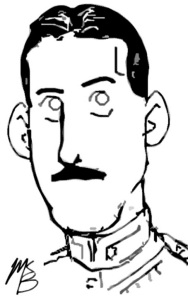 It was the C.O.’s intention to ride with “B” Sqdn. Whilst he was walking to his horse from a point where he had been reconnoitring, he was killed by a shell.

Charles Turner Van Straubenzee was a professional soldier and veteran of the Boer War. Born on 17 June 1876 in Kingston, Ontario, he was graduate of the Royal Military College and the University of Toronto. In 1898, van Straubenzee joined the Royal Canadian Dragoons as a lieutenant and distinguished himself in numerous battles during the South African campaign. He was promoted to major in 1911.

END_OF_DOCUMENT_TOKEN_TO_BE_REPLACED

Anything to which Sir William puts his hand will be carried out with energy, enthusiasm and efficiency. His past record is a guarantee of that. Consequently we can be confident that there will soon be a really representative Quebec regiment in the field to uphold the honor of the Ancient Capital on the fighting line.

William Price was a Quebec millionaire and businessman in the lumber and pulp industries. He was born on 30 August 1867 in Talca, Chile, where his Quebec-born father worked raising livestock and breeding cattle. After being sent to Quebec as a child, he was educated in England and returned to the province to work in the family lumber business, Price Brothers and Company Limited.

END_OF_DOCUMENT_TOKEN_TO_BE_REPLACED

… I am afraid we have had in the past, officers placed upon the general staff in time of trouble who are a long way better fitted to carry a constituency or empty a bottle of good Canadian rye in the morning.

Born in Toronto in 1859, Septimus Junius Augustus Denison was the brother of Colonel George Taylor Denison III and member of Canada’s most prominent military family. A graduate of the Royal Military College, he served for twenty-five years with the Royal Canadian Regiment and was aide-de-camp to General Lord Roberts during the Boer War. END_OF_DOCUMENT_TOKEN_TO_BE_REPLACED

We recruited more than three thousand men here, and could have gotten as many more had not the Government put an end to voluntary enlistment by throwing a political monkey wrench into the machinery.

It was for the same reason that the county battalions, one of which I took to England, were broken up into drafts for other unit.

Thomas Baird Welch was a chemist and commanding officer of the 26th Middlesex Light Infantry. He was born on 10 April 1867 in Kilwinning Scotland. He went overseas with the First Contingent in October 1914 and served as a major with the 1st Battalion in France from April to May 1915. He joined the 1st Division command staff until he returned to Canada in December 1915 to raise the 99th Battalion.

END_OF_DOCUMENT_TOKEN_TO_BE_REPLACED

We commanders in the field have to be very careful; if you make a success of a venture you are a great hero, but if you happen to lose a few men, no matter how well your attack might be planned, your position, your reputation, and, perhaps, your head may be the price.

On 2 September 1918, Cyrus Wesley Peck led the 16th Battalion against the Drocourt-Queant Line. Under heavy machine-gun and artillery fire, Peck completed a dangerous reconnaissance mission, captured crucial objectives and directed tanks to support of his battalion’s advance. For “magnificent display of courage and fine qualities of leadership,” Peck was awarded the Victoria Cross, the highest award for gallantry in the British Empire.

END_OF_DOCUMENT_TOKEN_TO_BE_REPLACED

“I don’t matter at all,” he said in a personal reference, “but the men who do matter are the privates and corporals who have gone through the Gethsemane of the front line trenches without a worry, save the worry they have about their dependents at home being cared for. These men and their families will demand that men who have given service to their country without profit to themselves shall represent them in the next Parliament..”

In anticipation of a possible wartime election, on 28 May 1915, the Liberal Party nominated John Inglis McLaren to run in Hamilton West. McLaren had just departed Canada in command the 19th Battalion. By the time of the December 1917 federal election and the formation of the Union Government, Liberals and Tories implored McLaren to withdraw in favour of a civilian Unionist nominee. He refused and contested the race as a soldier-candidate.

END_OF_DOCUMENT_TOKEN_TO_BE_REPLACED

War should be non-existent. But before that I would have one war–to clean up Moscow.